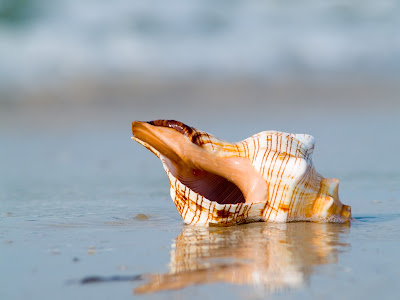 April's We're All Ears Challenge is perfect for me and all my fellow beach lovers. The theme is paradise calling. I love the beach and I feel warmer temperatures calling to me and I am beginning to dream in tropical colors.

I love the water and I had enameled tin components by Kimberly Rodgers of Numinosity.  The colors remind me of the ocean.  They are primarily blue with specs of aqua and white. The top third of these component had an open space of gray tin.  Since the components are tin they are very light weight. This presented lots of design opportunities to try without the concern of ending with heavy earrings.  I try to keep my earrings around 2 inches and on the light side.


I wrapped Irish linen thread with blue seed beads added around the upper third to accentuate the colors.  I used treated black steel wire to attach the tin components to the crystals and then to the fancy ear wires.  These earrings turned out to be less then 2 inches.

I made another pair of earrings that are inspired by the color of water.  I used ceramics by Jenny Davies-Reazor, handmade sterling earwires by BayMoonDesign, sterling links, metal loops in this pair.

This is a perfect challenge for me.  I love the ocean and spend a lot of time gathering inspiration from it.  I am getting ready for a craft show in my beach town of Lewes, Delaware so this challenge helped me get ready for it.

By the way, which pair is your favorite? 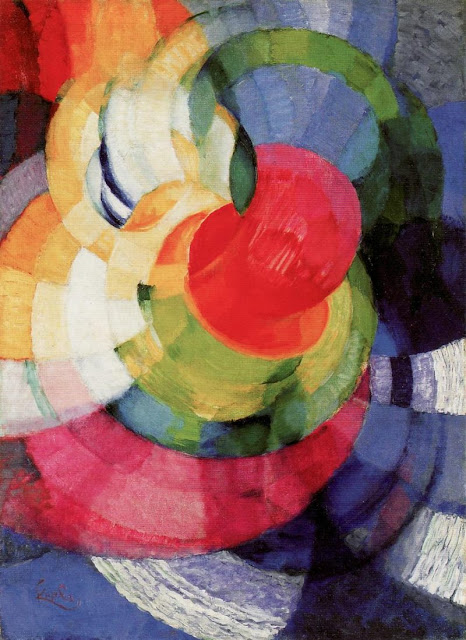 Title: Disks of Newton (Study for “Fugue in Two Colors”)

Every month the Art Bead Scene challenges their readers to create jewelry inspired by a featured artwork. You have until the end of the month to share your work and then they pick two winners to receive beads and jewelry-making supplies from their sponsors. The only rule is that you must use at least one art bead in your piece!

April's challenge is based on the oil painting Disks of Newton (Study for “Fugue in Two Colors”) by František Kupka.

The title of this work refers to the seventeenth-century English physicist Sir Isaac Newton. He discovered that the light of the sun is composed of the seven colors of the spectrum: red, orange, yellow, green, blue, indigo, and violet. It includes the full range of the spectrum as well as white. The artist’s fascination with cosmology and astronomy suggests that the circular blades of color whirling out from the red center may relate to images of the planets and their orbits.

František Kupka (23 September 1871 – 24 June 1957), was a Czech painter and graphic artist. He was a pioneer and co-founder of the early phases of the abstract art movement and Orphic Cubism (Orphism). Kupka’s abstract works arose from a base of realism but later evolved into pure abstract art.


Kupka had a strong interest in color theory and freeing colors. He devekoped his own color wheels, adapting a format previously explored by Sir Isaac Newton and Hermann von Helmholtz. This work in turn led Kupka to execute a series of paintings he called “Discs of Newton” (1911–12).

This is a wonderful piece of art to use for inspiration. There are so many color combinations that are possible. I decided to focus on the bottom left corner of the oil painting.  I saw this as an opportunity to use enameled tin components by Kimberly Rodgers of Numinosity.  This also presented me with the chance to make  totally different earrings then I have ever made.  The components had the enamel with speckles of pinks, lavenders, grays, whites.  The top third of them had an open space of gray tin.  Since the components are tin they are very light weight. This presented lots of design opportunities to try without the concern of ending with heavy earrings.  I try to keep my earrings around 2 inches and on the light side.
I first tried to cover the space with different sizes and kinds of wire with tiny seed beads.  This gave me a chance to try out different colors of seed beads.  Sadly, I didn't have any luck with the wire.  I then decided to try Irish linen thread and tried several color combinations of the thread before settling on lavender with gray seed beads.  The lavender Irish linen thread brought out the lavender in the enamel.  I also decided to use some lavender and white crazy lace beads to further bring out the colors in the enamel.


I am glad I invested the time in coming up with a new style of earring for my shop.  It literally paid off.  I sold these earrings--always good.
Posted by baymoondesign at Sunday, April 15, 2018 2 comments:


I am participating in Bead Peeps Swap'n Hop. Bead Peeps is a Facebook group made up of jewelry designers and it is administered by the very kind and talented Linda Anderson. Linda does a wonderful job organizing this and setting the reveal date. I am thrilled to be paired with Hope Smitherman. I feel like I know Hope really well. I read her blog Crafty Hope regularly and we have cross paths on other blogs and Facebook. Hope has an Etsy shop and I do too.

When I looked at the focals that Hope sent me, I knew right away that I was going to use the handmade chartreuse pendant is by Gaea. I love the vibrant color and design. I added to the art bead by combining it with a work bead by Grubbi that I adore.


I created a long chartreuse necklace by using some brass beads and jump rings. I then used some bright yellow crystals that Hope sent combined with dreamy Czech glass beads that I had on hand. They are combined in a rosary style chain and I ended the necklace with an antique brass chain leaf clasp that Hope sent me.  I think this will make a great Mother's Day, graduation, or spring birthday gift.  It is available in my shop HERE.

I also selected Hope's lovely repurposed vintage tin teardrop focal. It is perfect for a long floral teardrop necklace for the spring. I created a tassel of beads to surround her blue floral teardrop focal. The blue and green beads are green Swarovski crystals, blue glass beads, and some Czech glass beads. They are suspended from antique brass rings. I used blue beads to create a rosary chain and ended the necklace with an antique brass chain with a lobster clasp. The vast majority of the beads that are used in the tassel and chain are ones that Hope sent to me.  This floral necklace is for purchase HERE.

It was a real treat to have color picked out by Hope to compliment her necklace. It made creating the necklace go a lot easier.


I love making earrings so I couldn't resist using a set of polymer clay beads by Tree Wing Studio.  The brown textured beads have specks of red, blue and yellow. I combined brass and gold metals with yellow Czech glass beads, cream colored beads with the artisan polymer clay beads. These modern casual earrings hang about 1.5 inches below the brass ear wires and are light and comfortable to wear.  They are for sale HERE.

Grab a cup of coffee and enjoy seeing what others in this swap made.