August's inspiration for We're All Ears Challenge is one of the least accessible and most photographed vistas in the American Southwest-- Antelope Canyon.  Antelope Canyon is in northern Arizona.  It is home to some magnificent slot canyons. According to Wikipedia, the Navajo people have a name for the Upper Antelope Canyon - Tsé bighánílíní - which means "the place where water runs through rocks."  Slot canyons are chasms eroded over eons by wind and rain and raging floods to create one of the most spectacular natural masterpieces. Antelope Canyon is located on the Navajo Reservation and can only be accessed by licensed tours with a guide and a permit to visit them. 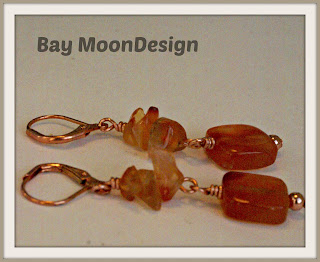 These orange agate earrings are inspired by the photo of Antelope Canyon. The colors and striation in the agate remind me of the canyon.  I paired the agate with copper in order to pick up more of the color.  These earrings are available for purchase HERE.

These are natural freshwater pearls are another great choice for a natural material to use in an interpretation of this beauty found in nature.  Beautiful freshwater brown coin pearls are combined with brown spike pearls. These special pearl earrings have  sterling ear wires that I made.   These earrings are available for purchase HERE.

How do you think I did?

August's Art Bead Challenge is based on the weaving "Summer Thunder" by Hosteen Klab.  In 1919, Klah began to weave sandpainting rugs which were based on the chants he was qualified to sing. His first sandpainting weaving was a whirling log design from the Nightway ceremony.  Klah’s last sandpainting weaving, "The Skies"   from the Shootingway ceremony, was done in 1937 and was not complete at the time of his death. The work was finished by his nieces, Gladys and Irene Manuelito.

While this month's color palette is predominately a rusty shade of red and black, there are a few other hues to draw out your muse. Purple is used throughout the weaving along with the neutral putty color. There are a few accents of gold, brown and a muted plum woven in the design.

The key to successfully using this color palette is pick one main color for your design and then choose a few of the accents to bring in interest to your jewelry piece. Proportion of the color will be important. Just as in our inspiration piece, one color dominate and then the accent add the spice.

The dominant color I choose to work with is black.  I added a few accents of gold, and rusty red.  The raven pendant in this necklace is a true piece of wearable art. The raven and small brown branch like bead are made by polymer clay artist Humblebeads. The ceramic branch is by artist Diane Hawkey. I made burnt orange polymer clay leaf for this rust necklace.  All were combined to make the focal for this necklace.

I choose the raven as the main focal because it is an Indian symbol. The meaning of the Raven symbol signifies that danger has passed and that good luck would follow. According to Native American legends and myths of some tribes the Raven played a part in their Creation myth. The raven escaped from the darkness of the cosmos and became the bringer of light to the world. It is also believed that ravens who fly high toward the heavens take prayers from the people to the spirit world and, in turn, bring back messages from the spiritual realm. Other tribes looked upon the raven as a trickster, or shape-shifter, because of its ability to adapt to different situations.
After putting together the raven focal with brass wire I continued using gold brass as an accent color.  I made a brass chain from links. The long black beads are wood and the orange beads are carnelian. A unique clasp made from a button that  holds the thin black leather around the neckline together. It is a perfect necklace for this time of year with the fall colors and Halloween theme. It is available for purchase HERE.
Posted by baymoondesign at Friday, August 14, 2015 4 comments:

In a previous blog I mentioned I took a road trip to visit my son in Allentown, Pennsylvania. This gave me an excuse to also visit the nearby and town of Jim Thorpe, Pennsylvania. My blog describes how this is an example of small town USA at its best. Now, my blog will focus on how this trip influenced 3 pieces of jewelry that I created when I returned. First, we need a little more background on this town.

Jim Thorpe was founded as Mauch Chunk /ˌmɔːk ˈtʃʌŋk/, a name derived from the term Mawsch Unk(Bear Place) in the language of the native Munsee-Lenape Delaware peoples. It is possibly a reference to Bear Mountain, an extension of Mauch Chunk Ridge that resembled a sleeping bear.  The original profile of the ridge has been changed heavily by 220 years of mining activities and it is thought to have once resembled a sleeping bear.  Mining became the basis for economic survival here.  Right in the center of the town is a huge piece of carbon which was the bases of the town's mining success in the 1900's.
There is still plenty to do in Jim Thorpe if you love nature. There is hiking, biking, river rafting and tubing adventures, camping etc. There are wonderful train rides available to take you through this scenic area too.


As a designer for ceramic artist Moriah Betterly, I arrived home to 3 of her ceramics that were inspired by Native American art.


This recent trip helped inspired me to made to create 3 pieces of jewelry with her ceramics.  The first piece a feather became a necklace that I made as a tribute to the Indians of the area.

The ceramic feather pendant is suspended from another handmade turquoise and black ceramic bead. I used a black aluminum chain and some turquoise agate beads to add additional color to the turquoise, red, black and white feather. The feather also has some black Irish waxed linen thread added to give it some additional texture. The long chain necklace is 24 inches around. The artisan feather pendant hangs 4 inches below.


The Bear Mountain is the inspiration for this big, bold, chunky, bear necklace made from the bear ceramic.  This turquoise bear necklace has a very handsome and strong looking ceramic bear focal by ceramic artist Moriah Betterly. I created a leather and chain necklace using turquoise Irish waxed linen thread to add to the colors in the bear. I added a bronze leaf clasp to add to the woodsy theme of the animal totem necklace.


The last ceramic of a bear paw became a multi strand trending bracelet . One strand is brass chain, another is leather, and the last is beaded with jasper bear charms, yellow Czech beads and brass beads. I was able to find these hand carved Zuni fetish bear beads in a wonderful Etsy shop called CrazyCoolStuff.

Where have you gone this summer that has influenced your art?
Posted by baymoondesign at Tuesday, August 11, 2015 No comments:

Make It Summer Year Round with Beach Jewelry

The modern sea glass earrings are  royal blue rectangles made of blue cultured sea glass beads and sterling silver bubbles. These geometric shaped earrings are on sterling silver ear wires. The trending  earrings are perfect for casual wear or the office.  The next pair of earrings are round aqua ceramic earrings with a wonderful texture to them. I love the swirls of blues, greens and tans. Pairing the handmade ceramics with aqua beads gives the earrings the color of the sea. They have sterling silver ear wires and spacer beads. The aquas, whites, and turquoise greens in this crochet aqua ocean shell necklace remind me of the turquoise waters of the ocean and white sand of the coastal areas in the Caribbean. I have combined some vintage white coral chips, bluish green glass shell beads, rice pearls, sea shells, shell chips, vintage sparkly crystal beads, and turquoise, white and clear buttons. I think that sea shells are especially fun.

This lucky cloud necklace has a blue and silver cloud that is handmade by artisan Andrew Thornton. I combined agate chips and pale blue stone with pretty royal blue seed beads and added a sterling silver clasp that I made. This happy cloud necklace would make a great gift for a weather buff or someone special. It is such a fun and happy necklace--a wonderful reminder of the blue sky and puffy white clouds of summer.

If you see something that you would like to purchase from my Summer 2015 Collection of one of a kind beach jewelry, please use discount code THANKU2 for a 10% discount on an order of $10 or more at checkout between now and Aug. 10.  I am offering this discount to celebrate Etsy First Friday Art Walk.  Other shops that are offering discount and their codes are listed HERE.

Posted by baymoondesign at Friday, August 07, 2015 No comments:


Znetshows challenge is met, but not with out planning and redesigning.  Znetshows offered their designers the chance to create jewelry featuring their  sea glass beads.  I was challenged to create sea inspired jewelry.  To begin this challenge I needed to selecting 6 items from the Znetshows catalog.  My first reaction was, YEAH!  I love to pick beads out and there are so many beads to choose from.  This turned out to be a huge task.  What shapes to I pick?  What colors do I select?  Truthfully, I think it is easier to just be sent a pile of beads to work with!  All of the time preplanning is eliminated then.

Once I found a focal, the task became easier.  I fell in love with the Peace focal pictured above.  The sea glass bead is available in a number of colors, but I feel in love with the Light Aqua `Coke` bottle Seafoam .  The color seems so tranquil and perfect.  It also reminds me of the sea.


I decided that I want to work with the bone shaped beads and selected the color crystal as my second color.

When the beads arrived, my plans changed.  My experience is that usually beads ordered sight unseen  offer some element of surprise.  I rarely have the opportunity to select beads in person so you would think I would be good at it by now.   Surprise--the 4mm seafoam beads offered little contrast against the crystal bone beads.  I  decided to use the silver beads instead.

I needed to find something to put in the center that would keep the bone beads from touching the PEACE focal and leaving a gap between the two.  I originally thought I would use silver wire to attach the focal.  I didn't like the look so I moved to beading wire which was an even worse choice.  I finally settled on Irish waxed linen which worked beautifully, but even wasn't straight forward.  I originally thought about using an aqua color and then switched to white.  I spent much more time planning than actually making the necklace.


After I made all these switches the necklace came together quickly and I am thrilled with it.  I love all of the silver in the necklace and the PEACE focal is beautiful.

I also made a matching bracelet and pair of earrings which you can see in the free online magazine Znetshows Creative Spark Summer 2015 on pages 11 and 12.


These pieces and lots of other sea inspired jewelry, vegetable inspired jewelry, upcycled jewelry and tutorials.  There are also social media tips and even items created with Znetshows cultured sea glass beads that are NOT jewelry.  Just grab a cool drink and Download HERE !