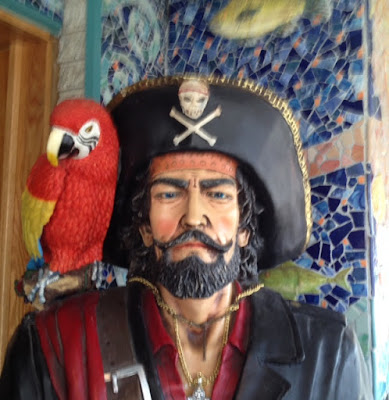 We all have one. Call it a treasure, or a bead stash. Call it loot or inventory.

The AJE Buried Treasure January Challenge this month is to create with a treasure --bead or component!


Here is how it works:


One of my favorite lamp work and enamel work artisans is a member of this group-- Sue Kennedy.  I bought these enamel leaves from her several times in different colors.  I love them.  I think that is why I hung onto this teal pair for so long before making earrings with them.  I finally decided to pair them with some teal crystals that have a slight hint of purple in them just as the enamel leaves do. They are available for purchase HERE.
Thank you for taking time to read my blog.  I would love to hear your comments and I welcome you to follow my blogs.
Posted by baymoondesign at Sunday, January 31, 2016 8 comments:

My Take on the Muffin Tins Challenge

For necklaces and bracelets, I use plastic bags.  I start with a focal like the yellow flower above and keep adding pieces until I think I have what I want to use.  This might take a year or two for me!  I have lots of these baggies.  The baggies then go into a box with a lid so they are portable also. 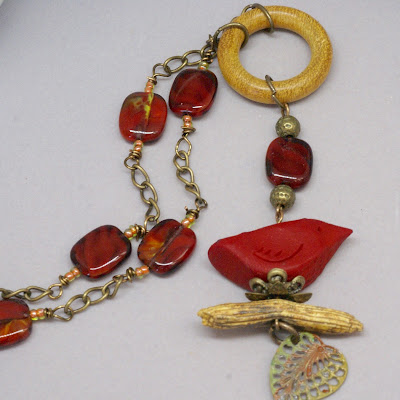 Cardinal necklace by Bay Moon Design
This cardinal necklace is a result of using the plastic baggy method. I have been collecting and making pieces slowly. The cardinal pendant in this necklace is a true piece of wearable art necklace inspired by nature. The red bird is made by polymer clay artist Humblebeads. The ceramic twig is by artist Diane Hawkey. I put a patina on the leaf to add some contrast in color. All were combined to make the statement focal for this red necklace. I used brass chain and gorgeous red beads with a hint of yellow. It finally came together just in time for this challenge and it is available for purchase HERE.


What bead storage and organizational methods work for you?


January is the time of the year that I restock some of my handmade jewelry making supplies.  I am using more and more of my own handmade components like clasps in my jewelry and selling some in my online Bay Moon Design online store.


I devoted a few days this month to making more gold brass clasps as well as copper clasps.

I am also beginning to make some copper leaves for my jewelry.  I love copper and I can't wait to finish these.  Right now I am at step 1--cutting the leaves out of copper.

I made a few polymer clay beads.  I hope to take the best looking of these feathers and put it on top of a copper leaf to make necklace.

I have also been working on my photography --always a challenge for me.  I am really happy with my new photo box.  I just switched out the white background for gray and I am even happier with my photos of my jewelry.

What have you been up to this month?

Posted by baymoondesign at Sunday, January 24, 2016 No comments:

This month's January Art Bead Scene challenge is a wintry-hued watercolor Landscape with Stars by Henri-Edmond Cross.  His paintings of the early- to mid-1890s are characteristically Pointillist, with closely and regularly positioned tiny dots of color. Beginning around 1895, he gradually shifted his technique.   Instead he used broad, blocky brushstrokes and leaf small areas of exposed bare canvas between the strokes. The resulting surfaces of the paintings resembled mosaics. His works may be seen as precursors to Fauvism and Cubism.


I see this month's color palette as fresh spring shades and a chance to use Pantone's colors of the year!

I think I nailed the colors in the landscape.  What do you think? 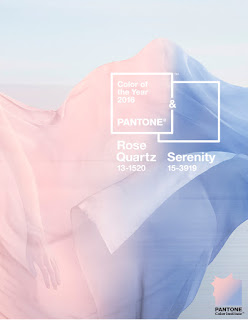 What colors do you like from the 2016 Pantone Spring color forecast? What will you be wearing - or creating with - in the coming year?  The We're All Ears Challenge for January is to use the spring 2016 palette to create earrings with.

The Pantone color of the year for 2016 has been announced... and it is a DUO-- Rose Quartz and Serenity.  This is a pair of colors that can work in tandem and blend and morph as is illustrated in the picture above.  I am going to sit back and see how others use these colors together. 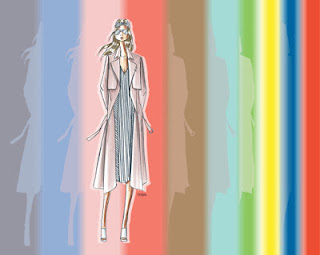 We are told on the Pantone site that this year's palette features color choices that are unisex to reflect a shift in cultural and gender norms. These color choices for both men and women are meant to evoke "a desire to breathe and reflect, then play."

For this challlenge, I decided to select from the other colors.Here is what the Pantone Color Institute has to say about the top 10 colors for 2016:
It seems to me that these colors are fairly close to the 2015 colors, but in a bit more vibrant palette.

The snorkel blue color is another color that I see in the Florida Key waters. I paired the blue sodalite stone with tiny sterling silver hearts and ear wires to create a unique and modern look. These pretty blue earrings have a romantic look to them. I think they are perfect as a Valentine gift or birthday gift.
Sodalite is thought to bring out compassion and love. These are all good things that the world needs more of! The earrings are available for purchase HERE.

I love the water and shades of blue so these are two colors that I know I will use in my spring 2016 collection of jewelry.  What colors call to you? 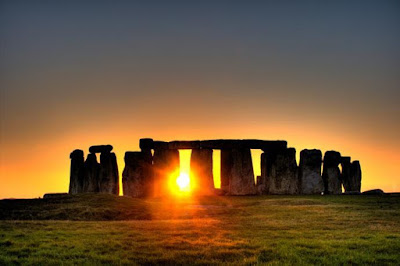 
The picture above shows the rising sun of the winter solstice as it shines through the carefully aligned standing stones of Stonehenge.


The last AJE challenge of 2015 is another of their themed events where they invited folk to join in designing beads, jewelry or decorative items inspired by a chosen subject.  The theme for this challenge is the sun.  The sun is very appropriate for this time of year since we approached the the Winter Solstice on December 22nd.

Throughout time many cultures understood the astronomical phenomena that divided their year into half light and half dark and celebrated the midwinter sun with festivals based on the need to preserve light and ensure the return of the sun. To ancient people it seemed that the sun may never return once it dipped below the horizon so they practiced rites to call it back and sought to capture it's light.  Around the world many ancient and sacred sites are oriented to capture the rays of the sun and moon at certain points of the year.

Some of us are celebrating the re-birth of sun with our creations.  I made this sun themed bracelet in honor of the winter solstice.  Actually it is make over too!  I decided to give an old bracelet a new look.

My original original sunburst bracelet had a handmade porcelain bar that sits on top of the wrist. The handmade artisan cuff bracelet is made from porcelain clay and glazed in blue, pink, amber and green by JeraLunaDesigns. It reminded me of the sun when I first made the bracelet and it still reminds me of the sun.  In fact, as soon as I read about this challenge I thought of this bead. Originally, I added deep purple and green beads, glass pearls, and crystals to the 2 strands that are attached to the bar with green seed beads.  I never liked the clasp that I used in this bracelet.  It  was difficult to open and close--a real turnoff to my customers.  I also don't think that the deep purple and green beads that I used appealed to my customers so I completely changed the colors and I made a new clasp for my new bracelet.

My new bracelet is designed to have the same handmade porcelain bar sit on top of the wrist.  I made a sun clasp using the directions from Heather Powers blog post.  I also made a matching sun component from brass to give the bracelet symmetry.  The brass also brings out the yellow in the porcelain.  I decided to use turquoise colors.  Who doesn't love turquoise. The bracelet just looks it luminates the rays of the sun shinning over the waters of the summer.  It looks like a much happier bracelet.  It is available for purchase HERE.

I really like the new make over.  What are your thoughts?

Please take some time and see what amazing pieces this blog hop inspired.

A Trip to Cades Cove Revisited 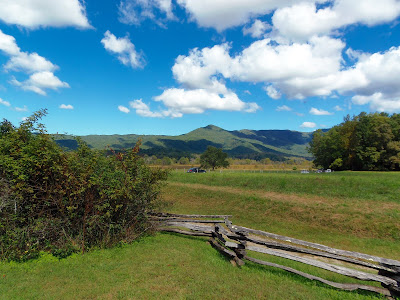 Most of my jewelry and cards are inspired by nature and I like to share with my readers some of the sights that I have found inspirational. This fall my husband and I spent 3 weeks camping in a small RV with our 3 cats in the Great Smokey Mountains. For me visiting Cades Cove was one of the highlights of this trip. I am sure many of you are wondering what is Cades Cove. Many of you are probably familiar with Dolly Parton's birth place Sevierville, Tennessee, or her theme park Dollywood near Pigeon Forge, Tennessee.  Cades Cover is near those locations. 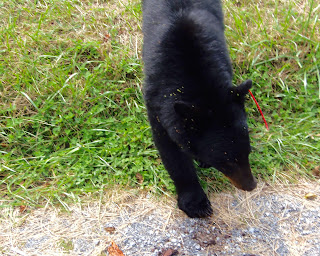 Cades Cove is an isolated valley located in the Tennessee portion of the Great Smoky Mountains National Park. The valley was home to numerous settlers before the formation of the national park. Unfortunately, for some of these settlers they were relocate in order for this park to be created.  I have mixed feelings about this. I am sorry for the folks that lost gorgeous spots to live on, but I am grateful that these areas are preserved for the future.


in Cades Cove you will find diverse wildlife. The cove draws attention for numerous black bear sightings. My husband and I lucked out and saw a bear up close. Multiple deer, wild turkeys, butterflies can be seen in the meadows and woods throughout the cove.

There are also well preserved 19th century historic buildings that include a school house, homesteads, and churches. The Cades Cove Historic District is listed on the National Register of Historic Places. 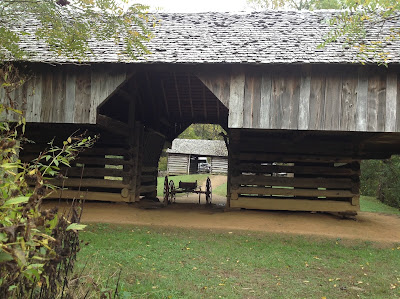 The story of Cades Cove is the story of the community that existed 115 years ago, between 1821- when families began moving into the cove to settle, and 1936, when the area became part of the Great Smoky Mountains National Park.

The cove stretches five miles in length and two miles in width, and is completely hemmed in by mountains. The land was attractive to agrarian people. It was only a matter of time before pioneers on their way westward would stop here and stay. They would settle, clear the land, and raise their crops and livestock. As more people came in to the area, they would form governments, churches, schools, and community ties.

I am grateful that so much history is so well preserved there.  I found it amazing that people could carve out a living in such a potentially harsh mountain but lush mountainous environment.  Many of the lives of these settlers written down so that they are preserved for future generations.

Posted by baymoondesign at Tuesday, January 05, 2016 No comments: