I have always been fond of red foxes. They live around the world in many diverse habitats including forests, grasslands, mountains, and deserts. , They are present across the entire Northern Hemisphere from the Arctic Circle to North Africa, North America and Eurasia. They adapt well to human environments such as farms, suburban areas, and even large communities. The red fox's resourcefulness has earned it a legendary reputation for intelligence and cunning. The species has a long history of association with humans, having been extensively hunted as a pest and furbearer for many centuries, as well as being represented in human folklore and mythology. 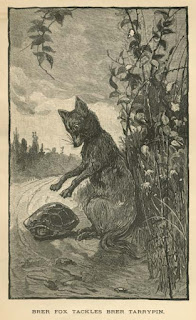 My experience with the red fox began in my childhood with folklore that I read and had read to me.  In folklore, foxes are typically characterized as cunning creatures sometimes having magical powers. The fox is also sometimes associated with transformation. In Europe, in the Middle Ages and Renaissance, foxes, which were associated with fraudulent behavior.  They were sometimes burned as symbols of the Devil. The term "foxy" in English ("having the qualities of a fox") can also connote attractiveness, sexiness or being red-haired. The term to "outfox" means "to beat in a competition of wits".

In elementary school I was exposed to Aesop's fables from 4 BC. A fox is featured famously in The Fox and the Grapes.  The story concerns a fox that tries to eat grapes from a vine but cannot reach them. Rather than admit defeat, he states they are undesirable. The expression "sour grapes" originated from this fable.
As a child I read Uncle Remus which is  collection of 19th-century African-American folktales adapted and compiled by Joel Chandler Harris, "Br'er Fox" is a major character, often acting as the antagonist towards the stories' main character, "Br'er Rabbit".

As a teen I enjoyed the animated Disney movie The Fox and the Hound which stars a fox named Tod as one of the two protagonists.

Perhaps my love of the fox began with the stories that I read as a child.  Before retiring to make jewelry, I was a children's librarian and my exposure to foxes in literature grew.  Now, I find myself using the fox as a element in my jewelry.

Currently, in my BayMoonDesign shop you will find this fox necklace.  The necklace is new and in my autumn collection.  The reddish brown fox is surrounded by a few charcoal gray Czech glass leaves and a bit of orange deer hide leather.  Those colors along with the quartz chips are favorite fall colors for me.  The necklace has multi strands.  There are 3 strands on one side and 1 strand on the other.   It is a choker necklace and is only 19 inches around.  The beautiful polymer clay fox pendant created by artisan Brooke Brock.  It  is one of a kind and is available for purchase.


Another example of my using the red fox is this fox bracelet.  This animal bracelet was tan leather straps and is held together with a brass clasp. The leather fox cuff bracelet fits a 7 inch wrist. The fox art bead is by artisan Humblebeads. It is a favorite bead of mine to order for bracelets.

Do you have an favorite fox memories that you would like to share?  I would love to hear them.
Posted by baymoondesign at Friday, August 25, 2017