Nova Scotia is home to over 160 historic lighthouses, but no beacon is as photographed as the one in the fishing village of Peggy’s Cove. Peggy's Cove is a small rural community located on the eastern shore of St. Margarets Bay in Nova Scotia's Halifax Regional Municipality. It is 26 miles southwest of Downtown Halifax and comprises one of the numerous small fishing communities.
Built in 1915, Peggy’s Point Lighthouse still keeps watch over the ocean waves and working lobster boats.
Today Peggy's Cove remains an active fishing village and a favorite tourist destination. From its beginning, the community's economy revolved around fishery. However, tourism began to overtake fishing in economic importance following the Second World War. Even though Peggy's Cove is a major tourist attraction, its inhabitants still fish for lobster, and the community maintains a rustic undeveloped appearance.

I wondered where the name came from and I found that there are two versions of the Peggy's Cove name story. The first version is that it is named after Saint Margaret's Bay (Peggy being the nickname for Margaret). It is likely that the village is named after Saint Margaret's Bay. Discoverer Samuel de Champlain named after the bay after his mother Marguerite.
There is another more romantic story that has more behind the name than because of its location. The second account of how Peggy’s Cove was named comes from a book "This is Peggy’s Cove," by local artist and sculptor William deGarthe. He writes about a Schooner that was shipwrecked on Halibut Rock, off the Lighthouse Point in a terrible storm of sleet and fog on a very dark October night in the 1800’s. He tells that the ship ran hard aground and with high waves washing her decks. Everyone on board was lost except for a young woman, who managed to survive the turbulent seas, swam ashore and was finally rescued by the people on shore.

Her name was Margaret. After the tragedy she stayed in the area and married one of the local men People from near-by places used to say, “Let’s go see Peggy of the Cove,” and before long they began to call the place Peggy’s Cove. 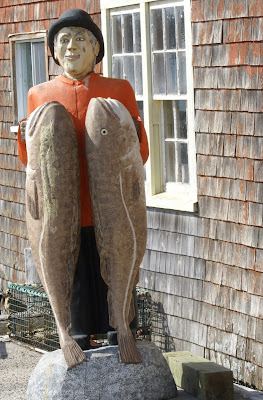 I like both versions of the name. Having a son, I have to admit that I also thought that Samuel de Champlain naming the bay after his mother Marguerite was wonderful. What mother wouldn't!  This is such a picturesque place with two romantic stories.

There are plenty of opportunities here to create tales in your mind here.  I wonder what adventures this boat had.  What happened to it?  I love the faded turquoise and orange on the boat. These are favorite color combinations that I like to use in my BayMoonDesign jewelry.


I wonder who used these lobster traps and when.  Where did they live?  Did they sell the lobsters to support a family?

I loved everything on this special place.  The memories will stay with me and inspire me.


Posted by baymoondesign at Saturday, September 16, 2017