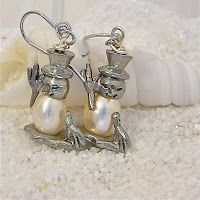 My virtual trip to Newfoundland, Canada, began this morning when I checked my email and discovered that I sold my newly listed snowmen earrings to a woman there in the town of Glovertown. Perhaps, it has started snowing there already and she is celebrating the occasion with this purchase. She may also be doing her holiday shopping early. I would like to think that she just couldn't live without these darling earrings. I noticed I only charged $1 for shipping. I was wondering exactly what I thought when I did that. Much to my relief the actual charge was $1.23 and I had to fill out a tariff form. I found that pretty exciting that not only was a purchasing internationally this summer, I was now selling internationally .Glovertown is a town in[Image] northeastern Newfoundland,Newfoundland and Labrador,Canada. Originally, Glovertown was called Bloody Bay. The name dated back to the eighteenth century it is thought to refer to a massacre of a family of 11 by Indians that were living in the area at the time. The town was renamed Alexander Bay in 1894. A few years later the town was renamed to Glovertown, its current name, after Sir John Hawley Glover who served as the Governor of Newfoundland from 1876 to 1881 and from 1883 to 1885. It has a population of 2,100 people as of 2001 Canadian census which means that it is smaller than my hometown of Lewes, Delaware. Like Lewes, it is know for the natural beauty of the area. The official website for the town has a nice collection of photos which show the natural beauty of the area.
Posted by baymoondesign at Sunday, August 15, 2010