I took a road trip to visit my son in Allentown, Pennsylvania. This gave me an excuse to also visit the nearby and very cute town of Jim Thorpe, Pennsylvania.   It is small town USA at its best.  The population is around 5,000.

The town has been called the "Switzerland of America" due to the picturesque scenery, mountainous location, and architecture.  It has survived and prospered over the centuries by repurposing itself.  Its scenery and its railroad and coal shipping center made it an attractive vacation and business location in the 1900's. 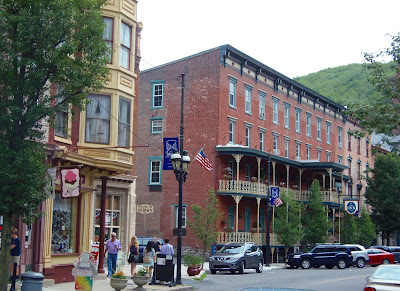 In the 1950's the town was in an economic down turn until it had an opportunity to rename itself after the Olympic medal winner Jim Thorpe.  There is a great story behind this.  Following the death of Thorpe, his widow was angry when the government of Oklahoma would not erect a memorial to honor him. When she heard that the boroughs of Mauch Chunk and East Mauch Chunk were seeking to attract business, she made a deal with civic officials. The boroughs merged, renamed the new municipality in Jim Thorpe's honor, They obtained the athlete's remains from his wife and erected a monument to the Oklahoma native, who began his sports career 100 miles southwest, as a student at the Carlisle Indian Industrial School in Carlisle, PA.

The town has found used for some of the historic buildings and been able to preserve them.  The Opera House serves as a spot for music venues. 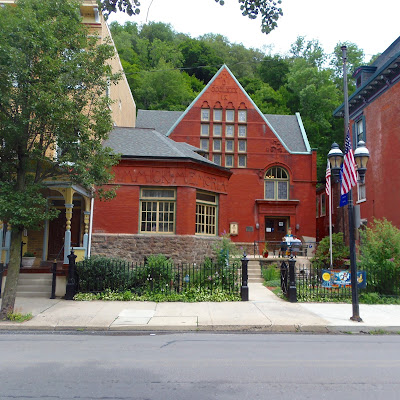 This beautiful building is the public library. 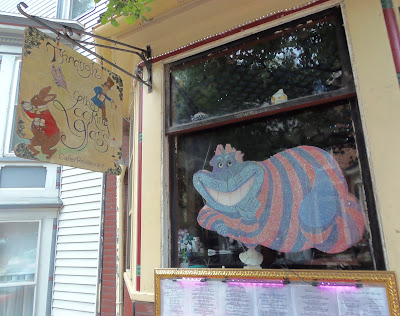 Other buildings are home to restaurants, pubs, coffee houses.

There are lots of shops here.  What town wouldn't have a jewelry shop?  I spent some time in Karen Blankenbiller's jewelry shop.  She makes contemporary jewelry and sells it in her New Day Finds Shop.

There are also lots of antique shops.  This gave me the opportunity to look for jewelry that I can repurpose.  I found these white beads and earrings and I knew right away what I can use them for and snagged a bargain.

I make crochet necklaces with shells and buttons like this orange crochet necklace.  These beads are perfect for this jewelry.  In this necklace I used pale peach and bright orange colors.  I use white beads like in the necklaces I purchase for contrast. What I love about this type of beach necklace is that It can be worn around your neck with one, two, or three loops. I prefer three.   My daughter likes to wear this casual design as a bracelet sometimes. This sea shell necklace is crocheted using monofilament wire so it has lots of flexibility. This is a lively and fun addition to a casual wardrobe. Several other colors are available in my shop.