Isn't it enough to see that a garden is beautiful without having to believe that there are fairies at the bottom of it too?
Douglas Adams, The Hitchhiker's Guide to thE Galaxy (1979), Chapter 16

I am very excited to be participating in an Art Charm Swap and Charity Event with the theme --fairy tales! Simply put, a fairy tale is a children's story about magical creatures. Fairy tales can have dwarves, elves, fairies, giants, gnomes, goblins, mermaids, trolls, or witches, and usually magic or enchantments.

I selected fairies as my magical creature to use as an inspiration for an art charm.  The term fairies can describes any magical creature, including goblins or gnomes.   At other times, the term only describes a specific type of more ethereal creature.  In modern fairy tales, fairies are usually depicted as tiny human-appearing creatures with wings and the ability to perform magic.

I wanted to build a house for a fairy.  The above photo serves as an inspiration for where my fairy house would be located.  I wanted to make a fairy house that blends in with this setting.  I designed one that looks rustic and made from nature.  I created an acorn like roof. The house looks like it could be made from clay found in the earth.  The colors I used are colors found in nature with a magical sparkle added.


I began by cutting dark annealed steel wire 22 gauge.  I love the rustic and earthy look it gives.   I used round pliers and wire pliers as well as carving tools.  I cut 4 to 5 inches of steel wire. 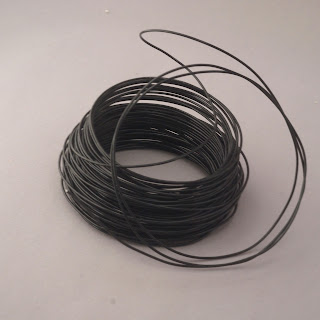 I then made a loop at the bottom and attached one of the tiny, rustic acorns that I purchased from Maya Honey.  I love the small size and the fact that the design is on both sides. 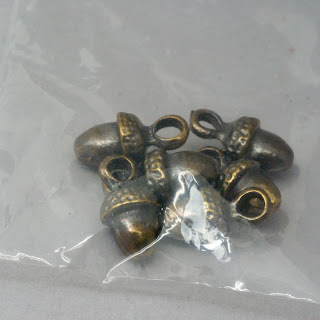 To create the fairy house, I mixed a tiny bit of emerald green color polymer cay with a yellowish green shade of clay.  I rolled the clay into a round ball and put my steel with the charm through the bottom center to the top center.  I squeezed the polymer clay ball gentle to form an oval shape and used one of my tools to press down the clay on the bottom half of the oval.  I ended up with a mushroom like top for a roof. 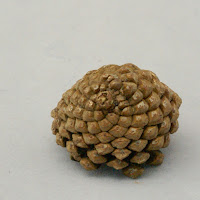 I textured the roof with this part of a pine cone and applied bronze PearlEx that I had on hand for the caps of the acorn. Next I used brown, yellow, and orange clay for the door, windows, and door knob.  I made the doors and windows and then applied them onto my fairy house.  The bronze PearlEx was then applied with tools.  I heated the charms for about 45 minutes at 265 degrees.

Posted by baymoondesign at Friday, September 30, 2016