"All you need in life is a friend with chocolate. I'm that Friend." 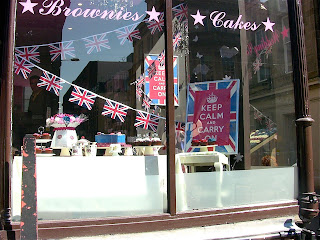 When walking down the street in Edinburgh, Scotland during my recent vacation, I had to stop at Bibi’s Bakery, on Edinburgh’s Hanover St. This is the bakeries second branch, building upon the Bibi’s brand success in St Andrews. There’s no sit-in area in the very pink and very attractively decorated shop, so it’s takeaway only.  All cakes are made in the shop and you can see the kitchen staff hard at work through a window on Rose St. The shop window is an attention grabber for a couple of reasons.  One who wouldn't stop to admire these lucious sweets.  The sign "Keep Calm and Carry On" caught my attention.  Perhaps you aren't familiar with it.  It was a poster produced by the British government in 1939 during the beginning of the Second World War.  It was intended to raise the morale of the British public in the event of invasion. It was little known and never used. The poster was rediscovered in 2000 and has been re-issued by a number of private sector companies, and used as the decorative theme for a range of other products. I became familiar with it through Etsy shops.  I have noticed this saying on lots of fellow crafters' products so I looked up what it referred to.  I noticed that the British were crazy about the saying.
Anyone who knows me, knows that I love chocolate.  I have been wanting to make a card and some earrings for chocolate lover's like myself.  I finally pulled it all together today.  I made the "Milk Chocolate" earrings last weekend and all week I have been trying to decide how to incorporate them into a card.  Of course, I purchased a Stampin' Up set of stamps devoted to chocolate a few months ago.  I've been anxious to use them.  This morning I finally decided that the card that I had been thinking about in brown and beige need some color.  I decided to add a powder blue paper and ribbon to give it some pop.  I also included the saying: