I just saw the 2010 film  "The Social Network" which if you haven't seen it is a film about the founding of the social networking website Facebook and the resulting lawsuits.   It is an amazing story which brought together some interesting historical facts that I was unaware of.  For example, I  had no idea that  Napster co-founder Sean Parker had a role in Facebook.  My knowledge of Napster goes back to my children's teen years when they were using Napster much to my dismay.  I lectured them endlessly about the dangers of computer viruses and the importance of intellectual property. As my children grew older they learned the hard way.  Viruses crashed their computers a number of times.  Napster was shut down.  Many of these events gave me fuel for my lessons at school.  As a librarian, I taught lessons on these topics.  I also discouraged my middle school students from participating in many social networking places like Facebook.


This past summer, I began to see what Facebook is all about.  I thought I would use it to help promote my jewelry and meet fellow artisans.  Social networking is suppose to help you meet people with like interests. Esty, where I have my online store, is reworking the site to utilize social networking features.  Recent changes to Etsy have resulted in my establishing deeper relationships with fellow artisans . I am pretty new to it, but I have met some artisans who use it very well.  Recently, I met a fellow Etsy artisan that has very cute items like the headband I have pictured  in her online shop   She has a very well developed blog with all kinds of social networking tools on her blog   To Sew With Love.  She and her sister co-author this blog.  Note:  We both use Bogger, but she uses it better!   I am going to learn a lot about social networking from her.  She has definitely mastered it.   Interestingly,  the bloggers Lelanie and  Laarnie  started as a Facebook group. Both are mothers who love to sew for their kids.  Lelanie lives in Mallorca, Spain and has 2 children. She has a BA in Language and Literature and an MBA degree.  Do you know what she is most proud of?  It is being a mother! I admire her for that.  She certainly has much to be proud of.  Be sure to check out her blog for craft ideas and giveaways.  Her current giveaway are these earrings by Evgeniya who also has a blog. Evgeniya is from Moscow and her blog features an American style meatloaf.  Go figure! 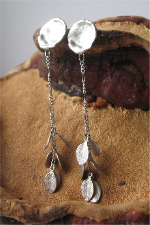 Posted by baymoondesign at Sunday, February 06, 2011